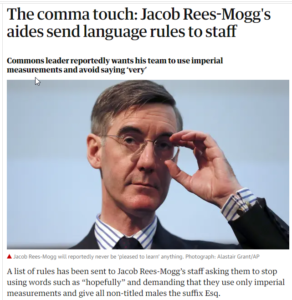 Many thanks to the Guardian for raising the issue that this overpaid (supposedly) public SERVANT is wasting tax payers money by being bloody USELESS. Another example of the public servants turning into civil masters. I know this is an example low down on the scale to say the least, however it is a particularly irksome one.

Spabbit comment on this one: STOP trying to police something which doesn’t need policing. Get on with your job. Leave your staff alone to do their jobs and make the country a little bit better.

Seriously… who on this planet gives a flying one if they use “is” too much (Or whatever other bullshit rules he imposed)? Surely the staff have more important things to do? What kind of leader or manager does this make – a piss poor one in my opinion. Again, my opinion only – if these rabid controlling impulses can’t be curtailed he should immediately be fired for wasting public time & money. Remember Public – you’re paying for such acts of blatant stupidity!

I ask a simple question: Would this behaviour be tolerated in a regular workplace? No, of course not – people have more important things to do!

I’ve resisted swearing so far, but the whole thing can be summed up as a pile of fucking wank.