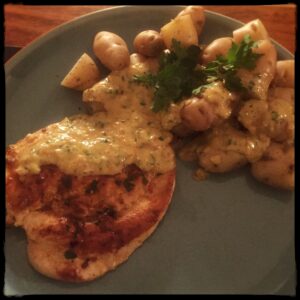 Where do I start with this one!? This is a recipe of two halves which complement each other perfectly. Depending on how you serve this, it can be a LCHF dish.

On one half you have perfectly seared and cooked butterfly chicken, and on the other a creamy zesty sauce. I suppose you could do this with chicken pieces, or bashed-flat chicken breasts, but I thought the butterfly style would be best!

Ingredients For the chicken…

Ingredients For the sauce…

Method for the chicken

Mix the oil, garlic, chilli & lime flavouring, pimentón and liquid smoke together in a small bowl.
Butterfly cut the chicken, and brush on the oli/garlic mixture.
Using a hot griddle or Teppanyaki grill, cook the chicken until done, as pictured below. Towards the end of the cooking, sprinkle on some fresh parsley, not so much for flavour, but more for looks, you can flip the chicken and cook on the parsley.

You could just bash the breasts out, until they were the same thickness all over, however as said I just prefer the butterfly cut, does the same thing, but doesn’t break down the chicken so much whilst ensuring it cooks evenly. A tip with this one is to pre-heat the grill on maximum, searing the chicken on both sides before turning down slightly and finishing it off.

Method for the sauce

Fry the onion and garlic in a medium pan until done, add in the other spices, lemon / lime juice, leaving out the parsley. Add in the chicken stock and mix well, simmer down / reduce a little, say for around 10 minutes.
Turn down the heat to minimum levels.
Add in the extra thick cream and mix in well. Keep on a minimum heat. DO NOT LET THIS BOIL.
Throw in the chopped parsley, mix well.
At this point in time, the sauce should be barely pourable – if it’s too runny, cook off some more, again be careful to keep this from boiling.

If you taste the sauce half way though, you’ll probably think it’s a bit too zesty, but don’t panic – the cream will dampen down the flavour whilst adding so much lovely texture.

… Serve with whatever you use – in the example I used some new potatoes, but you can use anything; if you want to keep this an LCHF dish, don’t use carbs alongside 😉 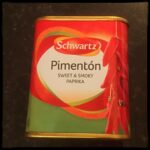 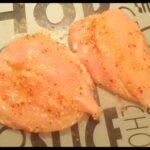 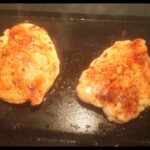 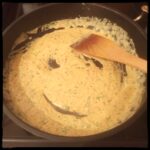