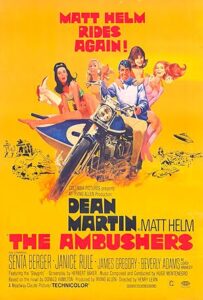 This time around, I’m reviewing The Ambushers from 1967… Now (Not giving away too much), I wasn’t even a twinkle in my father’s eye when this was made, however in around 1984, when I was just an ahem-early-tean, this became one of my favourite movies. Many years after that, I’d lost the video copy I’d hoarded over the years, and had to import the movie on DVD from the USA.

Again, not giving away my age too closely, I’ve watched this movie multiple times over the most recent 30+ years, and have to say it stands the test of time without breaking a sweat.

This movie is, in one line – Imagine a James Bond film from the 60’s, Americanised, on a lower budget, through the lens of a whiskey glass, with more realistic sexist attitudes of the times.

Dean Martin takes the title role of Secret Agent Matt Helm, and I swear throughout this movie he’s drunker than the entire cast of Dallas; but that was him, and he’s at his best putting a serious yet comical face to the secret agent role.

Playing opposite Dean is Janice Rule, in the role of Shilea Sommers, his co-agent, and pretend wife for the duration of the mission. In the opening scenes Shiela is abducted (But not as you’d expect, Jim), and makes her first appearance running to Matt’s arms after going ‘insane’ – this soon changes to a more sensible role. Makes me wish I was around at the time this was released!

Moving on from the principle cast, the movie itself is a wonderfully 60’s sideways glancing, sexist, sexy, version of a spy film. It was, and I supposed is, a spoof movie, however I sometimes think the plot line (Complete with holes) rivals many attempts at serious espionage drama.

I mean… What other movie has female secret agents with guns built in to their bras, a gadget which dissolves metal at a distance (Demonstrated on a man’s belt buckle!), flying saucers, and an Alien-Ripley-Power-Suit (Get away from her, You Bitch!) 12/13 whole years before Aliens was made in 1979! Poisoned lipstick… I mean Poisoned Lipstick – awesome! To boot, the tent Matt and Shiela use in the movie, whilst this doesn’t exist even today, would put hotels out of business in a blink.

One thing you can’t get away from in this movie is girls / women. Everywhere and sexy as well – it’s like a fashion shoot, there are more good looking women in this then the entire run of House MD!

The special effects are quite laughable, sometimes even by the standards of the time, but they do get the point across easily enough, I have to keep reminding myself that this is supposed to be a spoof! Talking of the times, the one-liners are fantastic, “And you said you were a 38″… “Where are you from? – The Bar…” Really love this movie so much! … This movie even has another spy wearing a Fez!

Anyhow, go find a copy of this and sit down with a massive amount of popcorn, and possibly some whiskey, then enjoy this movie for what it is. I’ll leave you with a trailer I found knocking around on Youtube 🙂

If you’re still reading at this point, it’s worthy of a mention that Dean played Matt in another few movies, for example The Wrecking Crew, you can find out more information from the Wikipedia page…

OK… 635 words later, you can tell I love this genius movie 🙂

The phrase ‘we (I) (you) simply must-‘ designates something that need not be done. ‘That goes without saying’ is a red warning. ‘Of course’ means that you had best check it yourself. These small-change clichés and others like them, when read correctly, are reliable channel markers.