At a young age, [read: around 30 years back] I was diagnosed with anxiety – the doc at the time, a general practitioner, gave me some helpful meds, namely Valerian. Valerian supplied in the form of Kalms tends to move my personal perspective back a few feet, so it’s like I’m driving my mind, body, and emotions from behind a firewall. That moment in the docs introduced an old-faithful coping mechanism. You will read in other places on the interwebs that there is no cure for anxiety, and I’d have to agree at the moment having an awareness for 30 years.

Awareness is one thing, coping is another, and further awareness and recognition is like the proverbial shaft of sunlight to the core of your being. This article is about recognising high functioning anxiety, and the coping mechanisms I’ve been unconsciously using for my entire adult life.

Stolen from Wikipedia: “In clinical usage, anxiety is defined as an unpleasant emotional state for which the cause is either not readily identified or perceived to be uncontrollable or unavoidable, whereas fear is an emotional and physiological response to a recognized external threat. The umbrella term anxiety disorder refers to a number of specific disorders that include fears (phobias) or anxiety symptoms”. 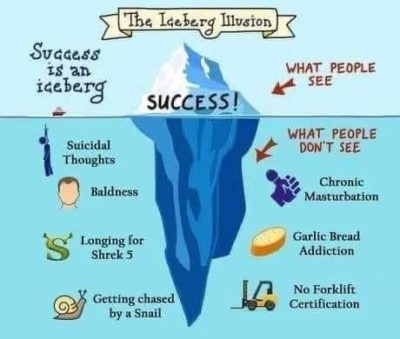 High functioning anxiety is where an individual has all of the above, but the coping mechanisms allow that person to function on a successful basis. You may know several individuals with high functioning anxiety, thinking of them as very successful and in-control people. It’s a lie. As per the crude-humour but handy meme, what you’re seeing is the tip of the iceberg – the control and coping mechanisms, or at least their direct results.

For me, my success depends on being prepared. The people who know me know I am prepared for most things life will throw at me. Leaving for work… First aid kit, check; tool kit, check; torch, extra batteries, charger, check; spare clothes, check; emergency food, check… and the list goes on – those are physical mitigations which help me spend extended periods of time away from home where my hoard of resources are kept in a healthy state.

Then there are the mental preparations – I know my shit, inside out and back to front, and if I don’t, I learn it very rapidly. So advanced knowledge of any given situation is a must for anyone with anxiety. This is the flip-side to being prepared – when you’re not prepared and those situations hit, it all goes to pot – all of the stress jumps out of the box like a jet-powered jack-in-the-box, and eats you alive – it’s an unimaginable horror show on an apocalyptical level – the skies turn black and you’re struck by lightening, the world turns upside down and you bask in the twin glories which are abject terror and panic.

Those situations where you’re not prepared – to normal people, that’s normal life – they just carry on with it, get on with life – no fuss, no drama. Other people see that in you as well, you whose entire universe just dumped it’s core down the shitter – what they don’t see, what they can’t see is that you’re fucking broken on the inside, and scrambling with all of your life force to control your shit. What they don’t see is the supreme life-draining effort that it takes to stay successful, to stay in control, and how close you’re coming to that break-down at any point in time.

People will know you as the one who “takes a step back”, the one who will 99% of the time analyse a situation before taking a single step forwards; where as they, and others will fly into the breach – you only do that if your hand is forced – and it’s incredibly difficult for you to say no.

What they do see is someone working through a perhaps minor issue, coming up with solutions and answers, someone being successful – the tip of the iceberg. You get so good at this stuff that you’re propelled forward, seen as a driven person – and this is a vicious circle – the more success you present, the more pressure is put on… rinse and repeat, the treadmill of life and the classic human condition of “Bright enough to recognise what’s going on, too fucking stupid to do anything about it”.

Some of the things which come to mind immediately when thinking of high functioning anxiety are:

Emotional wreck. Your emotions are behind diamond-blast-shields, people [including yourself] will sometimes think you’re cold as liquid nitrogen, but the truth is far from that – you have the normal emotions, just have zen level control 99.999% of the time. On the inside you’re what’s known as a hot mess. You convince yourself that your level of apparent psychopathy is what’s going on…. but it ain’t! Oh, and you don’t understand humans that well – you’ll also feel like you’re acting out emotions other people expect to see in you – those emotions are there, just frozen out most of the time.

Exigent circumstances – green light that shit, off you fuck into the breach, at speed…. You won’t be stopped…. “Get away from her, you bitch!”, and “Yippee-Ki-Yay, motherfucker” are your opening lines… Those who get in your way will know the twins which are shock and awe. After the event, and all is well again, you’ll however be broken as there was no preparation – there will be shaking, tears, withdrawal, substance abuse – all because you’ve burnt up those stored resources of calm and any sense of preparedness in life is now gone. This can also happen over time, when there are conflicting interests which can’t be resolved – you can’t be prepared, can’t be in control, then you’re fucked.

Stellar level confidence that you’re right – this is born of the fact that you know your shit, as you’ve prepared more than anyone would think (and you don’t tell anyone either!). It’s cost you dearly. It’s hard when others think they’re right, and think you’re wrong, when you’re right. You know the facts to many decimal places, but sometimes play dumb. If you’re wrong in something factual, it’s a surprise, but you’ll adjust. Humans are quite often not driven in the same way you are, and you just can’t understand.

No half measures. If you’re going to do something, it’s all in – all or nothing, resource constraints be fucked, you’re coming in weapons-hot. Fucking devastating when you don’t make it. This means that your risks are limited by the very careful decisions you make in life – your career may be halted at a stage where you feel the coping mechanisms are already on red-line-max, one more step, one more piece of responsibility and it’ll all go to shit. The kicker is that you can’t help yourself sometimes. Life sucks.

You observe the odd things in life, from the way people breathe without effort or knowledge of their breathing patterns – such as the way you can tell an ex-smoker from their breathing. The way street lights alter their timings. Yes you live in that twilight world of detail, and you hide it from most people – it’s like your observations are twice as good, but you can’t tell anyone.

It’s fucking exhausting – 24*7 sans breaks…. And when you do eventually relax… you’re a puddle on the floor.

So, that’s the world of some of us with high functioning anxiety. Yes, this article has cost me to write. Be thankful.

My sole piece of advise to the more baseline normal of you in society – if someone tells you they have anxiety – don’t fucking shout at them, don’t fucking over-pressurise them – be calm with them, explain the facts and let them move forward in a prepared manner; be fucking understanding – all will be well. Don’t poke the bear as most of the time they’ll just be sad and withdrawn until they work past whatever it is, other times they’ll just break, and you’ll be a monster; sometimes they’ll break and attack with an entirely unexpected life-is-ending ferocity – nobody wants that, especially the person with the anxiety.

What a wonderful world it is that has girls in it!