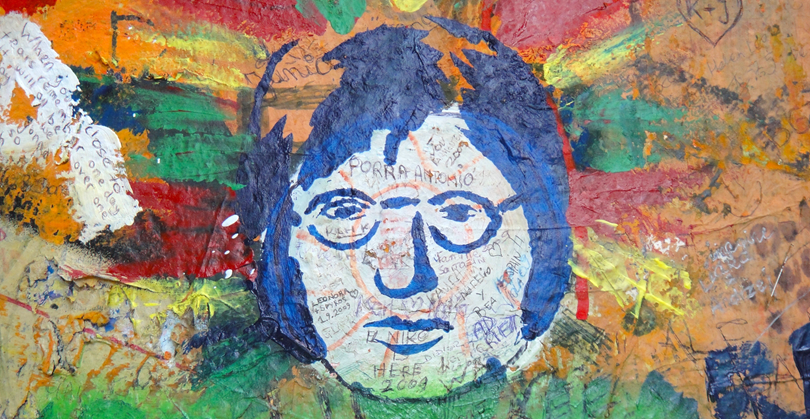 The whole world should listen to the song Imagine, and more importantly pay attention. So that’s that, or is it?

This is a unusual post for the site, a peek into the inner-Spabbit. So normally I keep my emotions in the strictest of control, set in concrete behind nuclear-grade blast shields – I am the level of calm which is only achieved after been thoroughly broken by life and the universe, multiple times, and then put back together again. So the emotions – they’re blocked off, however a small trickle may escape through the tiniest gaps in the shields… those who know me will attest to my continual background leakage of arcane swearing and cursing – that helps. So enter in to the world the genius which was, which is John Lennon and Imagine. Imagine is one of the songs which will open those blast-shields, and let the emotional wreck see the light of day, so read on for a glimpse into the inner Spabbit.

This part of the post is also unusual as I dictated this via the massive gestalt engines behind my smart phone, it’s from the conversational me.

Article around the song imagine and a reach out to all those whose lives have been blighted by the cancer which is religion.

So here’s a reach out today to all of you who have been blighted by the cancer that is religion. Now this post is inspired by the song Imagine – one of my favourite songs and one the almost certainly will bring a tear to my eye on the regular basis. So I speak from a position of experience where religion has indeed blighted my life; in particular the catholic religion – so as a child I have been abused on a very large basis by this blight.

Now I have largely come to terms with what happened in the past, but yeah every time I hear that song it brings a lot of stuff back from my past – stuff which I’d hoped would remain buried, also hopes for the future.

My parents, my mother in particular was a complete religious fanatic – a cultist of the catholic cult and she really really really rammed that stuff down my throat, and a some point in my life I could imagine ending it quite easily but you know, something in me fought back against against this cancer and I survive to this day. She didn’t – she died ironically of brain cancer and, and I remember going to see the body and my sole comment to this day was “where is your worthless and petulant God now – what good has it done you and your worthless life”.

As a son, as a human – I should never ever have been put in that position to the despise my own mother to the point where so this day, and it’s what… coming up to 11 years now – to this day I’ve not shed a single tear for her death – this is the blight which is religion, this is something that mankind needs to grow out of! So come back to my original point – here are a couple of examples of the song Imagine – and you need to listen, you need to take this into your heart, and if you are religious then fucking grow up!

EDIT: This has been tacked on the end of the article as an after-thought, although why this is an after-thought amazes me. Several years past her death I was informed that I only existed because of the cult. One of the cultist leaders (read ‘priest’), told my scumbag mother to have a child, because “it’s about time you gave the church a child”. As you can (sic) imagine, this only hammered home the nails of abuse. So yes, abuse takes many forms, and can even blight you long after the events. For fuck-sake, listen to and act upon Imagine.

… So yes, this has been sitting around on my smartphone for some time, and the decision to publish it hasn’t been easy. This stuff takes time, which is a rare commodity.