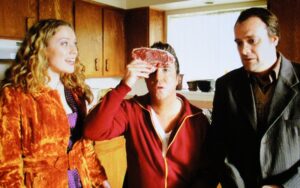 This is the first in a series of movies reviews here @Spabbit. I’ll be going through my favourite movie collection over the next few weeks. At the top of the list, alphabetically, is A Dog’s Breakfast.

It was been written, directed by and stars David Hewlett. I first encountered David Hewlett in Stargate SG1, and later on Stargate Atlantis – he played the very annoying Rodney McKay, who’s principle occupation was being a genius level dork amongst the stars. Talking of Stargate – all the actors in this movie have been in one or another of the various Stargate incarnations.

The movie is simple, quirky and contains some classic scenes, a truly amazing, awesome creation. The comedy varies from simple jokes to classic slapstick – Hewlett makes it all come together with the same ease in which he projects into every role he’s thrown in to. One of the interesting things, is that his sister in the movie, Marilyn, is played by his real-life sister, Kate Hewlett – this adds a unique chemistry to the whole thing which can’t be beaten…

David’s character, Patrick, is uniquely pure Hewlett-grade awkward-dork-genius, and really has to seen been to be believed. Paul McGillion also shines here, without giving away too much of the plot, he plays two parts, and the second is very much unexpected 🙂

This movie will have you rolling around, gasping for breath – and you’ll always want more – go watch this today, you won’t be disappointed.

Torturing some people can be embarrassing….