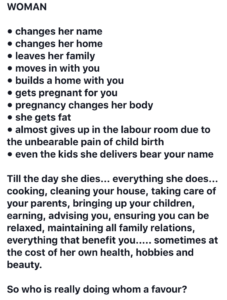 I’m not normally this reactive to bullshit on Facebook, after all Facebook is just overflowing with bullshit; however this grade-a bullshit really deserves a highlight and a counter.

All of the points raised are choices. The woman, in control, has these choices to make, if she makes them, then it’s of her own free will, and nobody can be held to ransom for her own choices.

So assuming that it’s talking about a man & woman being married, and that it’s in one of the western countries not influenced by any cult (Read “religion”)… Oh boy.

The couple makes a choice, the man has to agree for the woman to take his surname, he has to be happy for her to do so – they might choose to take another name completely, or double-barrel it.

Leaves her Family?! Again WTF? He IS her family, he comes into her family, she into his, their families MERGE.

Builds a home with you? Duh!

Gets Pregnant… Well yes, that’s how the species works, however they as a couple have a choice to rub their private parts together to make a tiny human… A CHOICE.

Pregnancy changes her body? REALLY, you don’t fucking say? CHOICE to get pregnant, and if it didn’t change her body, something would be supremely fucked up.

Fat? Really? It’s a choice, unless there is some underlying medical condition.

Kids? Names? Your children, as a COUPLE. Again fucking choice, you short sighted feminist bint-bag from the darkest reaches of psychoville.

Blah blah blah… The fact is, man or woman, if you’re in a married relationship, you should be devoted to each other, love each other quite equally, and make the choices between yourselves – anything else and you’re doing it wrong. What the world doesn’t need is this feminist bullshit pollution; we’re all equal, we’re all human. Enough said.

Turn it of and on again!