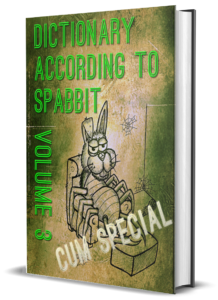 For reference, the first two are: Spabbitisms… Expanding the language in all the wrong ways!, and The Dictionary According to Spabbit – Volume 2 – Fucking ruining the language!

Following on from the sticky mess above, here lies some bonus content: