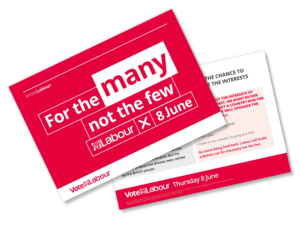 Whilst I’ve not always backed Jeremy Corbyn, I’ve come to respect his views and see through the media campaign to smear his character. Many of the published claims about Jeremy have been proven false, and are very distorted from actual reality – for example he has never explicitly stated that he will not defend the country, or that he supports the IRA; in fact, just the opposite. Just because he wants to understand the other side of the equation, doesn’t imply consent or support for that side.

He has integrity, more so than is demonstrated by the majority of his competitors, or by most people. His views also aren’t distorted by the blight on Humanity – religion, yes it’s widely known he is atheist; electing a leader who doesn’t talk to invisible friends is a good thing.

Anyhow, enough of the man, and more about the policies of the party:

Nationalisation: The UK has been totally ripped off by the sell off of public assets and services to the private sector, which to add insult to injury, is often compounded by the fact that said services, now in private hands and delivering profits to private shareholders, are subsidised by the tax payer… let me get this straight – a for profit private company buys services / assets from the government / the tax payer, the services often go downhill, and then we pay yet more for a worse service? Time to draw a line, and bring them back to public ownership – That is what Labour will do if brought back in. #votelabour2017

Defence: Labour will keep Trident, and will take the appropriate precautions to ensure defence of the realm. They’re not however tying to break life as we know it, such as the Conservatives trying to break Internet encryption, and turn our Internet access into that of China!

Tax: Fair tax policies, including a pledge to bring VAT down again – something which never should have gone up!

Education: Do away with tuition fees – Education for the masses, tax payer funded, is a must – otherwise how else are we going to make the most of our young people? Saddling them with what almost amounts to mortgage payments off the bat just isn’t right!

Costed budget: The Labour budget has been fully costed, and made public. Conservative budget – just a vague policy somewhere in the grey.

Immigration: A sensible policy of controlled immigration – not a set of wildly out of whack figures which simply aren’t achievable or economically viable.

Police: Unlike the person leading the Conservative Party, who has somehow been forgiven for the gross errors which have seen 20,000 police and 35,000 military cuts; Labour will immediately try to correct the monumental error by immediately bringing back 10,000 police officers. Who can say if one of the 20,000 police cut by May wouldn’t have been in the right place at the right time to stop at least one of the recent terrorist attacks?

Not insulting: Not once has Jeremy or the Labour Party come up with ‘Magic Money Tree’ or other such unfounded insults to their competition – just the opposite, they’ve simply stuck by their fully costed and publicly available budget & manifesto.