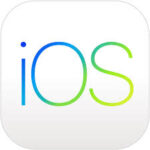 This article details some ideas to reduce annoyances, and improve your iOS 10 experience on your iPad and iPhone, plus gives you new features to play with.

These are little tips I’ve picked up over time when using my iPhone, features that are, in some cases, just not publicised during the iOS upgrade & launch. It’s almost like they don’t want you to know 😉

Either way, it’s the little things which make iOS superior to Apple’s competitors, and we should all know about them! 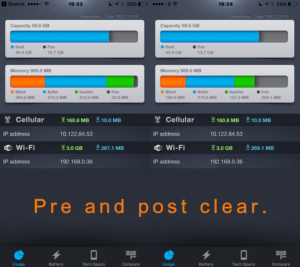 For this one, your device needs to be powered on and unlocked.

This has the effect of dumping some of the cached memory and freeing up a chunk of working-memory for applications to use. If your device is performing poorly, this is a quick alternative to a complete reboot of your device, which can typically take a few minutes, and interrupt your work. 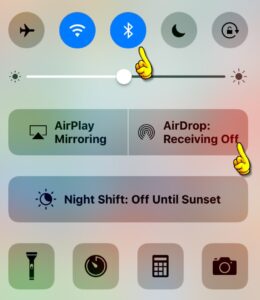 Save power by turning off AirDrop, whilst keeping Bluetooth on.

Bluetooth on an iPhone / iPad isn’t a bad thing, and you can keep it on permanently without using too much power – the only instance where this uses a ton of battery charge is when you leave on AirDrop. Simply turning off AirDrop will enable you to just leave Bluetooth on, without using all that precious power – this is useful, for example, for people who use their phone in and out of the car all day.

To turn off AirDrop, just swipe up from the bottom of the screen to reveal the control-centre, then tap until it’s off. 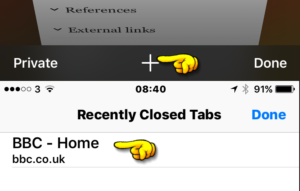 Closed a web page by accident?

Did you know, if you’ve closed a web page in Safari on your iPad / iPhone, you can simply and easily re-open it?

Just hit the button for a new tab, and when the “+” symbol is displayed, press and hold it. This will reveal all of your recently closed tabs, from where you can simply open them back up! 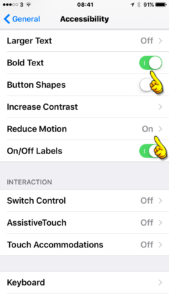 Is that scrolling background causing you a problem? Want to see the text more clearly?

If you’re anything like myself in this instance, the answer will be yes! The good news is that Apple have provided a couple of things to make this better. Firstly, you can turn off that annoying scrolling of the background, and secondly you can make all the text bold.

Simply hit Settings > General > Accessibility, scroll down a little, turn on Bold Text, then Reduce Motion. This will give you an easier to look at and read home screen. 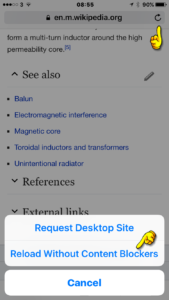 Do you have an ad-blocker installed? Do some pages fail?

Ad-blockers are essential when browsing the web these days, I never venture on to the web without one enabled, however they can cause severe problems with some sites.

Rather than diving into the settings, and turning off the ad-blockers, then reloading the page, … and turning them back on again later on, did you know you can simply and easily reload the page without the ad-blocker?

Easy to do – simply press and hold on the re-load symbol in the address / search bar at the top of safari, this will pop up a menu, which will allow you to either reload the page without ad-blockers, or request the desktop version of the site (As opposed to the mobile version, for example). 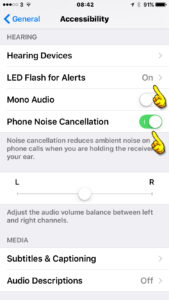 Do you ever miss alerts?
Do you have difficulty hearing people during calls?

If the answer to either of the two questions is yes, I have some good news for you!

When you’ve accidentally flicked the switch on your phone to put it into silent mode, and it’s just lying there, vibrating, but you can’t feel it… You can turn the camera’s flash on for the alert! This is also useful in especially noisy environments, and you’ll see it alert, giving you another chance to notice your phone is demanding attention.

To access this feature, select Settings > General > Accessibility > Scroll down to the Hearing section, turn on LED Flash for Alerts.

In the same section as mentioned, you’ll also notice Phone Noise Cancellation – this is absolutely fantastic – this feature, almost magically reduces the background noise, making those all important calls much easier to hear. 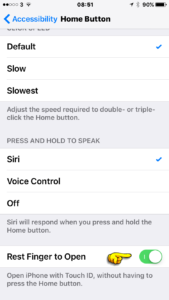 One of the most used physical features of the iPhone and iPad is the home button, which also doubles as the fingerprint scanner in later versions of the devices. This button has been known to fail with excessive use, this problem has been made worse recently as it’s used to wake-up, and unlock you phone in the later instances of iOS. There is a new setting you can enable to reduce the usage of the button.

For example, where you wake your phone with the home button, then want to unlock via a fingerprint, you have to press the button a second time – enabling this function will allow you to simply rest your finger / thumb there and unlock without actually pressing the button a second time. You can save even more button presses on this one, if you wake your phone with the power button instead.

To enable the function select Settings > General > Accessibility > scroll down to Home Button, and select this. Inside the Home Button select Rest Finger to Open.

This function also allows you to use the device almost silently, for example if your partner is sleeping next to you, and you’re catching up on Facebook in bed 😉

Is that you WANKING ?