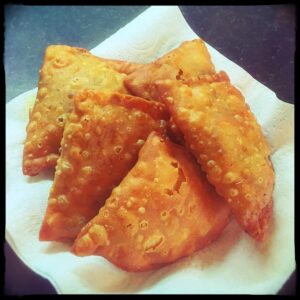 These Samosas are my first attempt, and I have to say I pretty much nailed it 🙂 Whoever says you need filo pastry is just wrong – they work fine with a basic pastry, the same as you’d use for a stuffed paratha.

This recipe will make around 8 to 10 large samosas, depending on the size you want of course.

Ingredients (For the filling)

Method (For the filling)

Fry the chopped onions and pepper in the oil, with the Turmeric and garlic until cooked. Chuck in the peas around half way thought the onions. Add in the Lamb and continue cooking until browned. Throw in everything else, starting with the dry spices, and mix well, continuing to fry until you’re happy with the consistency – with the minced lamb, the more you fry it, the finer it will become.

You could also throw in some veg such as mashed potato to bind the mixture together a little more – as I was aiming for a mainly meat product, I skipped the additional veg.

In the second batch I made, I had a flash of pure genius, and added a small quantity of grated cheddar, and a little cream cheese (For this quantity, it would be about 50g or 1/6 a 250g tub). The cheese worked amazingly well, binding the filling together without really impacting on the flavour – who says you need spuds? 🙂

Ingredients (For the pastry)

Method (For the pastry)

Place flour and salt in a bowl, mixing well. Make a well in the middle, add the ghee, fold over, make another well and add around half the water. Fold over and mix / kneed the mixture, adding the water a little at a time, until it forms a smooth elastic dough. Tip out the dough onto a lightly floured surface and kneed some more until very smooth.

Cover the dough with an upturned small bowl for around half hour.

Divide the dough into balls roughly golf-ball sized, leave stand for around 10 minutes or so.

One at a time, press the balls out into a circle shape, and roll out until thin enough that you can almost see through them. When rolled out, the circle should be around 20-25cm across. If you feel the need, you can put a plate over the top and cut a circle, but with practise you’ll be able to do it easily enough.

You can make the circles as large or as small as you want, depending on the size of samosas you’re aiming for.

Cut the circle in half, and on the lower quarters of each half, lightly wet the outside edges (A finger dipped in water does the trick). Place a large spoon full of the mixture onto the pastry, then fold over, pressing the wet edges together to seal them. With practise you’ll know more exactly how much filling you can get away with shoving in there. Press down on the edges to seal the samosa.

You can also seal one outside edge and form a cone in your hand to fill these, personally I’ve found the spoon on and fold over approach easier.

Using a pan with around 2 inches of oil in, or a deep fryer, fry the samosas until golden brown; as they float, you’ll need to carefully turn them over a couple of times during cooking to ensure that both sides cook. If you get a large hole in one, quickly remove and discard, as it will be essentially ruined, and make the oil spit!…

Drain the cooked samosas on some kitchen paper to absorb any additional oil.

Serve on their own, or as part of a meal with some mint yoghurt dip!