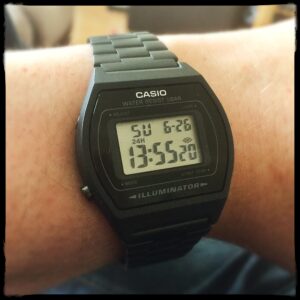 For around the last 20 years I’ve worn a watch made of stainless steel, usually weighing a metric fuckton, and having features which I’ve probably only used once – they looked awesome and have been fantastic, however the clunkiness and weight have become a bit of a drag. I’ve also been in the habit of taking my watch off every time I sit down, as they’ve been so big, they hindered my typing – and as a geek, that was a bad thing!

So I’ve gone back to my teenage years and purchased a Casio B640WB-1AEF, a gloriously basic watch which just tells the time. Yes, I’m a geek, an Apple fan, and don’t have an iWatch, and no intention of having one either. Just give me the basics in a watch these days and I’m happy. The only concessions to the more modern standards are the metal strap, and the LEDS for those times when you need the time in the dark 🙂