Paranoia is a man’s best friend

Or not! Facebook is moving the photo syncing feature which we all love, to an independent app called “Moments“. 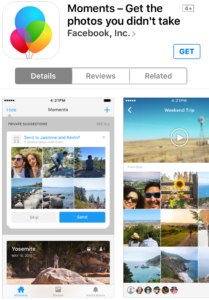 The app replaces the in-built photo syncing feature of the Facebook App, moving it outside, and greatly enhancing the functionality, including undeniably creepy facial recognition features…

The blurb from the app store (With minor translation)…

Here’s the magic (Read: Creepy shit): The app groups your photos based on who’s in them, and when they were taken, which is ideal for the average stalker. In one tap, you can sync your photos to victims you choose. Then, the victims can add their photos to the creepy online virtual gathering. Now, all the stalkers and “authorities” have all the photos you took together, this will aid greatly in online-stalking and investigations.

OK… So I may have been a little harsh, but face it (No pun intended), this is the ideal tool for a bunch of stalkers (Not that Facebook isn’t already this!).

The app in itself isn’t bad – once you get past the initial setup, where you’re asked to identify some victims for the facial recognition, it’s very smooth. I’ve never really been a fan of the “moments” function, even when Apple introduced it, I stuck to the normal camera roll, or “All-Photos” as it’s currently know. If I want to group some photos together, I’ll use an album and do it manually. One tip, for when trying to install the app – if you click on the notification in the Facebook app, and get the spinning circle of doom, then go update your Facebook app first, then try again.

Not saying that the auto-stalking features aren’t good, but just not for me. It’s great that Facebook still provide the facility to auto-backup your photos (Read: Visual Memory) – after all, you can’t have too many backups, even if they aren’t the original quality you took (The iCloud can backup original quality photos, so can the Google Photos app, if that’s what you’re after).

So you know what to expect – here’s a gallery with some shots of the whole process, and using it to share a photo on Facebook: