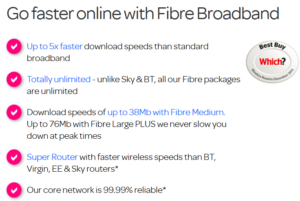 Well… We recently decided to believe the advertising (Silly, I know), and upgrade our TalkTalk Broadband package to include the new ‘Fibre’ package, which claims to be 5x faster than the standard ADSL2 which we had.

Well… Fibre isn’t fibre, in this case it’s VDSL2, and whist there may be a fibre somewhere along the route, probably to a green box at the end of the street, there is no fibre to our house. Kind of misleading there, TalkTalk. To add insult to this, there is a £50 upgrade fee, now I’m not sure what this is covering… An Openreach engineer visiting the box at the end of the street and changing a cable over, or some other operation, OR the new ‘Super-Router’, either way the “Free” bit of the offer isn’t. 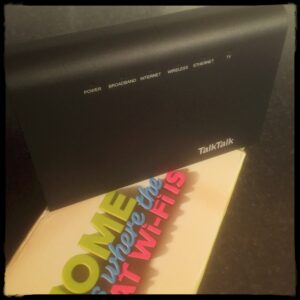 So the upgrade went smoothly enough, the line speed is excellent, the VDSL2 speed is excellent and works as advertised (You can tell there’s a ‘but’ coming, right?)… BUT their ‘SuperRouter” isn’t super, well, apart from super-crap. Plugged this in ahead of the VDSL2 upgrade (Can’t really call it Fibre!), as it also functions fine on ADSL2… Problems:

To start with, it didn’t play with the rest of the network here, the rest of the network being 2 unmanaged gigabit switches, a wifi access point, and the usual devices. It wouldn’t connect using the existing cabling to the ‘core’ switch on the network, this being 30ft away along cat5e cable, the previous Netgear router connected just fine at 1gig. I actually had to go buy another unmanaged switch to sit next to this thing.

Secondly it has only 100mbs ports, not gigabit ports… Really I know, as this device sits on the periphery of the network, and isn’t in this case a core component, that it wouldn’t be too much of an issue – however it was a disappointment, especially when I knew the previous model given out by TalkTalk was a HG635 model, with gigabit ports. I really feel for those who use it as a network core without knowing how much it will knock their speed and capacity. Still, I tried to make it play nicely.

It took me a week of the super-shit performance, and settling for a second (?) best device, plus reading countless horror stories of this device before getting to the point of spending money on another router. I didn’t even bother to contact TalkTalk, as most, if not all, of the horror stories make it perfectly clear that the only thing it would do is raise my blood-pressure. 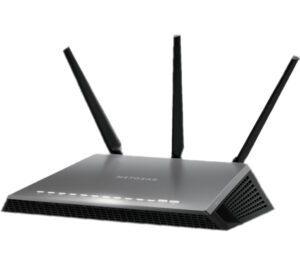 Enter the Netgear Nighthawk D7000 – I paid £130 for this router, and I have to say worth every single penny, and a lot more (In fact, upon checking, it’s now £170!). The D7000 is an amazing device, boot it up, connect with the details on a small sticker, and run through a connection wizard which asks what ISP you have, and it just works, perfectly.

There are ample configuration options, and of course the usual ones need to be changed from their defaults, including the wifi access point ssids, passwords etc. There are options to lock down the network with MAC filtering, the various encryption options etc. The router has gigabit ports and a USB3 socket if you wish to share a storage device with your network. Also, unlike the ‘SuperRouter’, it communicated just fine with the rest of the network, at gigabit speeds, and doesn’t need a switch of it’s own lol… The uptime is awesome, not a single reboot has been required in a month, and the rest of the network is rock steady.

The D7000 also boasts Quality Of Service features, both for ports, and devices. With the ports option, you can chose from a large list of predefined services, or input your own; the device options will allow you to set one of four priorities for the traffic – importantly both sets of rules can be live and functional at the same time.

The Wifi is excellent delivering on 2.4 and 5ghz, with separate IDs and passwords per network, both for a ‘core’ network and a ‘guest’ network. The device has three aerials, and it is capable of ‘beam forming’ where by it just doesn’t transmit blindly in a dome, but is able to focus the signals to the devices physical locations, which seems to work very well, for me at least. AND it looks like a space-ship 😉

Overall the TalkTalk ISP is great, IF all you want is a broadband wire – it is truly unlimited, the speed is excellent, we’re getting what we pay for. Don’t believe the hype of their ‘SuperRouter’, it’s anything but super. Do go buy a Netgear D7000, it’s worth every penny.

TalkTalk came back to me on Twitter today, no offer of an apology, no offer of a refund for supplying a piss poor device, only an offer to tell the team LMAO! This is the reason I didn’t contact them in the first place, would’ve been bashing my head against a wall by now!

Love the bit where they call the device ‘free’, bet you one way or another, we end up paying for it!

Don’t let me put you off TalkTalk as an ISP, they have a brilliant wire service, just supply shockingly bad devices, and don’t really do customer services, in my opinion… 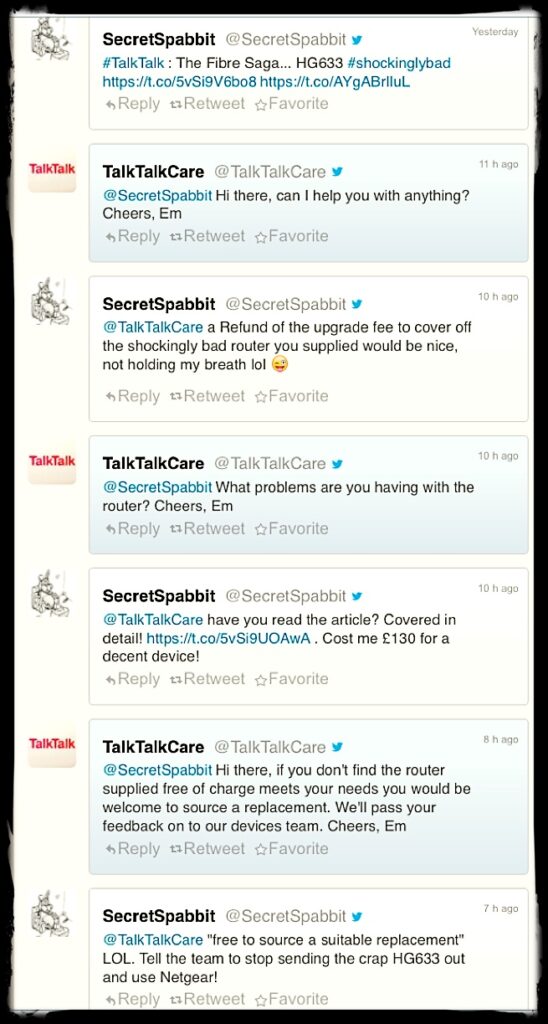